For newcomers to the wearable universe, this is especially important to think about, because it’ll be more motivating to wear and get used to your smartwatch if you have options to do more things.

Even if you’re used to wearing watches and other wrist-accessories, you’ll want to be able to enjoy the features of wearable tech while also being able to minimize the high-maintenance (charging) side of running an extra piece of tech. With the long battery life, durable chassis, and interchangeable bands, the Samsung Gear Sport will do just that.

Working seamlessly with any Samsung phone, an added bonus is the ability to use it with not only any Android phone, but also with iPhones. This makes the Gear Sport an intriguing choice for anybody looking for a durable and fully capable smartwatch to track heart rate and activities. Here’s what we like and don’t like about the Samsung Gear Sport: 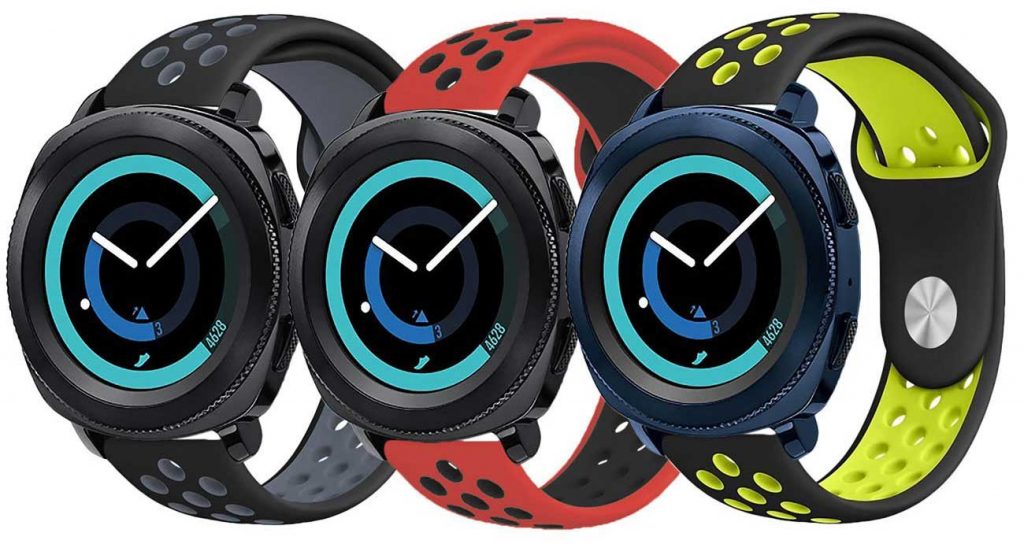 COMPARED TO THE COMPETITION

If we compare the Samsung Gear Sport to the previously released Gear S3, you’ll quickly agree with Samsung in that this isn’t supposed to be an “S4.” The Gear Sport is Samsungs answer to Apple’s advances in the fitness and health side of wearables AND fitness tracker makers who are adding more smartwatch integration into their devices.  It’s shaped up to be another fully-capable option in an already nice selection of wearables Samsung has released in the last couple of years.  Similar to the AT&T exclusive Samsung S Active series of phones, the Gear Sport is the sporty brother to the Gear S Watch Series.

Sitting slightly smaller than the 46mm Samsung Gear S3, the Samsung Gear Sport measures in at a sporty 42mm.   At 42mm, it just happens to be the same size width as a large size Apple Watch, so people with extra-small wrists might want to look at the Samsung Gear Fit 2 if you want smartwatch functions from an even smaller but equally powerful fitness tracker.

With Apple lacking a true fitness-first piece of hardware, iPhones users are stuck with choosing an alternative fitness tracker and losing a lot of the smartwatch functions the Apple Watch offers.  With iPhone, even though you won’t be able to take calls and answer texts, the Gear Sport will still be able to display all of your notifications, pair health & fitness companion apps, and do other smartwatch functions not available on traditional fitness trackers.

In conclusion, the Samsung Gear Sport has enough functionality to rival any true smartwatch and the perfect combination of battery life, biometrics, and activity tracking to rival any true fitness tracker.  Slap on your favorite type of 20mm watchband and pick from a seemingly endless choice of watch faces to fit your style.  Be sure to get watchbands with quick-release pins, so you can change them easily.